For our tours we use good comfortable hotels in the region, which are appreciated by travelled guests.

Skip worries of sightseeing entrance fees and other planned activities

Starting from capital of Georgia, Tbilisi  a one day-tour  is a great chance  for an unforgettable experience of your vacation in Georgia. On the way to this magnificent ancient cave town, that was built in rocks, you will enjoy the diverse nature and discover amazing Rabati Fortress in the town of Akhaltsikhe.  On the way to Vardzia we will have a stop also near the Khertvisi Fortress. Below more details about the places and the price.
Our first stop will be Vardzia:
Vardzia is very next to the border with Turkey. The city was erected in the 12 th – 13 th centuries during the rule of George III and his daughter of Tamara for the purpose of the southern boundaries of Georgia protection. Vardzia is not just a set of random rooms cut in rocks. It is a multi-storied (!) complex with streets, tunnels and stairs leading to monasteries, temples, fortresses, baths, libraries dwelling houses and so forth.
All in all there are over 600 premises connected by passages which stretched along the mountain for as long as 800 meters, to the depth of 50 meters standing 8 levels tall. In case of an enemy attack the monastery turned into a fortress for inhabitants and could host up to 20, 000 people.
In the 13 th century Vardzia suffered from a major earthquake (1283) when a 15-meter rocky slab fell in the Kura . As a result the monastery lost its function as a fortress. Later Vardzia suffered from Mongol invasion in the same 13 th century, Iran defeat and Turkish yoke in the 14 th -17 th centuries – all those events led to the city's destruction. In 1828 Dzhavakhetia was liberated by Russians and life returned to Vardzia. During the Soviet period the monastic life in the monastery stopped and renewed only in the late 1980s. Today about 15 novices live in the monastery. Since 1938 Vardzia has been a memorial estate.
Our next stop will be Khertvisi which is  one of the most ancient fortresses in Georgia. Even though the date of its construction date is unknown, there is a proven fact of its standing on the Great Silk Road. Despite all millennia it has survived in its original state. The mountain, on which the fortress is standing, wonderfully combines history and the present.
Next we will drive to Akhaltsikhe city, where we will explore the old stone Rabati fortress, the main sight of the Akhaltsikhe town, which is standing on the small hill. Its name means “fortified place”. This military building erected in the 13th century had witnessed a lot over the centuries. The fortress had been destroyed several times, was often in a siege, as a result of which had absorbed tracks of different cultures and religions. In 2012 there was held a large reconstruction after which Rabati fortress in Akhaltsikhe turned into a town within the town. It has become not only a historical monument, but a real cultural city centre.
After that we will go to Borjomi, its mineral water has become a well known brand and a calling card for Georgia. The sulfuric water’s healing properties are proven to be directly beneficial to the digestive system and metabolism. We will try Borjomi water, will have a walk in the park and then at the evening will go back to Tbilisi. 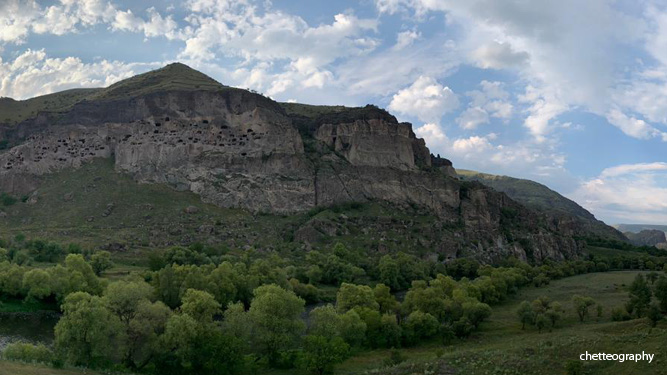 To and Fro economy class air travel for ‘I-fly tour’ guests as mentioned in the itinerary
Tour Manager Services from Day 01 Meeting point till the dropping point on last day
Travel by comfortable A/c or Non A/c coach / Vehicle as per the tour itinerary
Entrance fees of all sightseeing places to be visited from inside
Accommodation in comfortable and convenient hotels
All Meals – Breakfast, Lunch, Dinner (set menu) as mentioned in the itinerary
All Tips – Guide, Driver & Restaurants

Any upgradation in Airline class or hotel room category
Any extra expense such as route change, Airline change, Date change, Accommodation facilities, etc incurred due to the unforeseen, unavoidable forced majeure circumstances during the tour
Porterage (coolie charges), laundry, telephone charges, shopping, wines & alcoholic beverages, mineral water, items of personal nature and food or drink which is not part of a set group menu
Any extra cost incurred on behalf of an individual due to illness, accident, hospitalisation, or any personal emergency
Any services or activity charges other than those included in the group tour itinerary
Anything specifically not mentioned in the ‘tour price includes’ column

We use cookies to ensure that we give you the best experience on our website. If you continue to use this site we will assume that you are happy with it.OkNoPrivacy policy